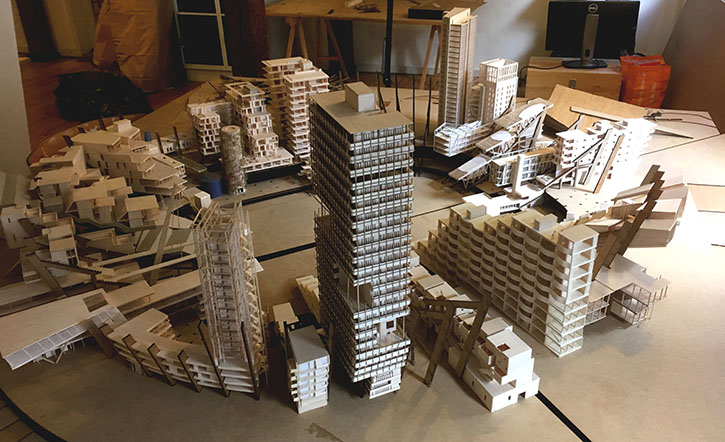 Starting on the 11th of October, Studio 1C will display an exhibition in the canteen. The exhibition is called White Elephant and will be on display until the 2nd of

Starting on the 11th of October, Studio 1C will display an exhibition in the canteen. The exhibition is called White Elephant and will be on display until the 2nd of November.At the moment a worldwide discussion is ongoing regarding the long-term consequences for the host countries of mega events. Particularly, mega-events such as the Olympics and the FIFA World Cup tend to leave an enormous economic vacuum, especially when hosted in third world countries.
Prior to these mega-events, the host countries are requested to invest heavily in large-scale built structures and infrastructure that become obsolete at the end of the event.

The expensive on-going maintenance of the oversized, and, largely unusable, compounds are imposed the host countries for several decades subsequently. Therefore, these buildings are gaining a status as monuments of social inequality, and thus they result in public malcontent.
How to absorb these oversized sports facilities into the urban fragment instead of becoming an economic burden is sought addressed in the exhibited assignment proposals. Thus, the site chosen for the assignment is The Cape Town Stadium, which was inaugurated in 2009: Originally, it was built for the FIFA World Cup that took place in South Africa in 2010.Cape TownToday, Cape Town is a city of mixed, however segregated, cultures, due to a turbulent past primarily influenced by both the Dutch and the British colonial rule, not to mention the apartheid regime in the second half of the 20th century.
Despite initiatives such as The Act of Reconciliation the legacy of apartheid, however, is still represented in the built environment in Cape Town. It is not only the buildings of the apartheid regime that is being picked on. Thus, recently, the Cape Town Stadium, among other World Cup Stadiums in South Africa, became the object for severe criticisms. These criticisms are with great probability rooted in the social context as well as history.
Overall, the assignment aims at initiating a mixed-use program into the iconic large-scale sports facility. By stripping away the soft tissue and radically engage with basic structure by adding housing units and attached programs, the Cape Town Stadium is intended to be redeemed as a new housing community within the Green Point area in Cape Town.