THE WINNERS OF DRAWING OF THE YEAR 2019

Aarhus School of Architecture has announced the winners of the international drawing competition Drawing of the Year 2019. Post Human Metamorphosis was the theme of this year’s competition. Students from 45 countries took part in the competition, and the winners were found among a total of 124 entries.

The winners and the jury’s specially selected drawings, the so-called ‘special mentions’, were announced Thursday, 28 November, at DOKK 1 in Aarhus.

The first prize of 5000 euros was taken by Wenhao Yang and Wenqi Wu (China) from Tsinghua University (China).

The jury had the following to say about the drawing:
“The first prize winner has made a remarkable drawing that makes us reflect on human values, culture and identity. By using well known references like trophies, teddy bears, sculptures and memories from our daily lives the drawing questions whether such artifacts will exist in the post human era or whether they will be forbidden – and hidden – in an analogue memorial tower like Ruins Ring.

The cathedral-like architecture with vitrines and shelves has a strong, clear composition, resembling a wunderkammer with its kaleidoscopic accumulation of objects. A very vivid drawing where one can explore times from before VR and AI. At the same time it has melancholic trajectories to Venice, the place for greatness and decay, sought by humans for its glorious past. Who are we without our memories and history, and do we want to give it up?” 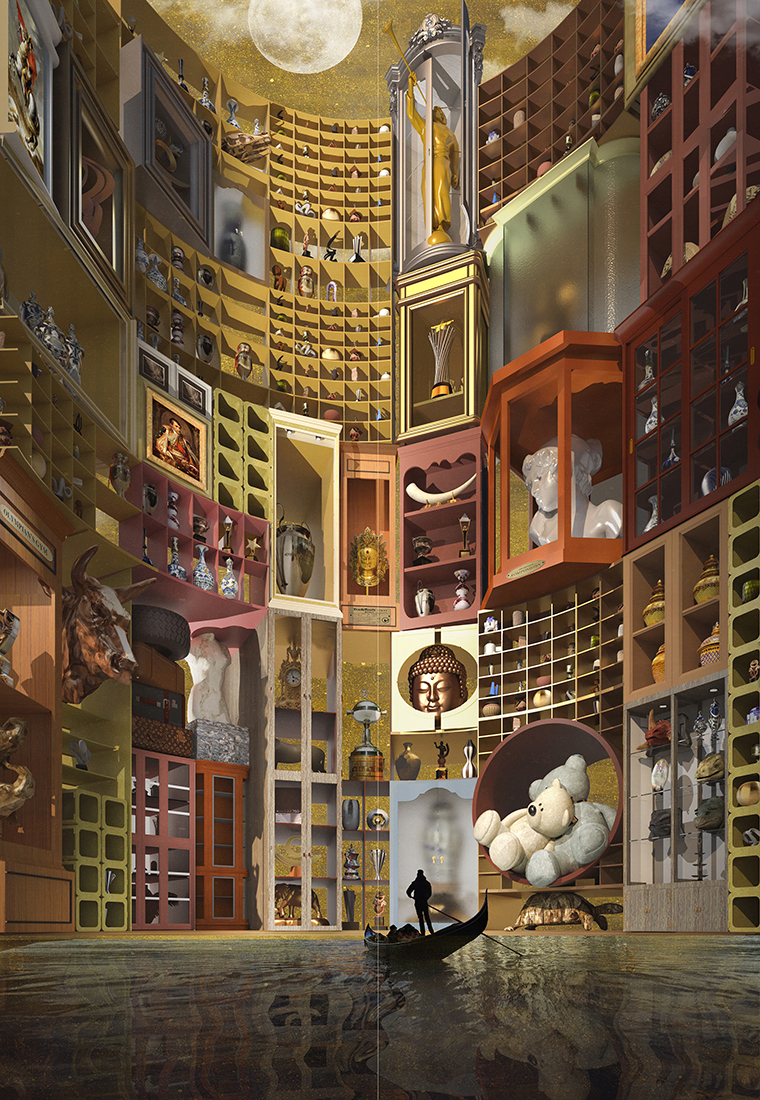 The second prize: The Post-Human Parliament

The second prize of 2000 euros was taken by Haris Hasanbegovic (Denmark), Aarhus School of Architecture (Denmark).

The drawing was created by a former Bosnian refugee. It urges all architects to commit themselves and take action. It also comments on the Danish debate about refugees: the Danish parliament is transformed into a temporary dwelling for refugees.

“Using subtle, classical drawing instruments, section and perspective, the drawing is a provocative message and a call for inclusion, charity and open minds. The daily tasks of the politicians continue alongside the new inhabitants of the parliament”, said the jury. 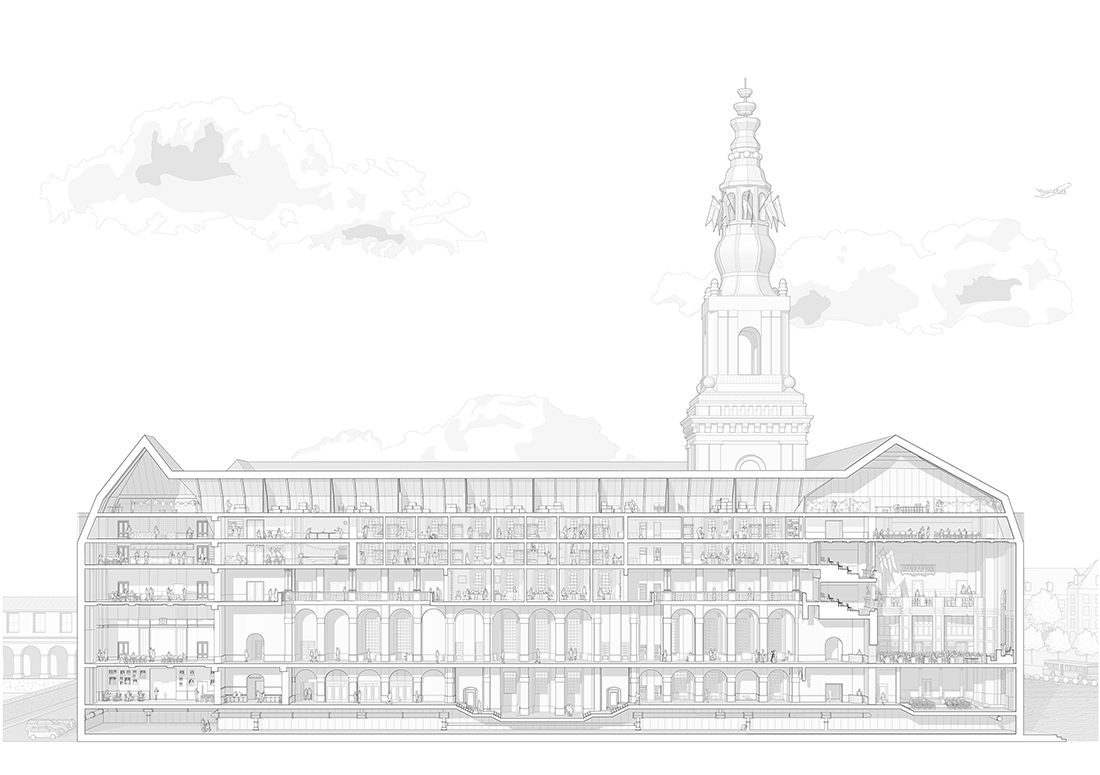 The second prize was taken by Haris Hasanbegovic (Denmark) from Aarhus School of Architecture (Denmark) for the drawing "The Post-Human Parliament".

The third prize: The Void Between Light and Shadow

Youngi Kim (New Zealand), The University of Auckland (New Zealand) takes the third prize of 1000 euros for a drawing which celebrates nature and recognises the knowledge possessed by New Zealand’s indigenous population, the Maoris.

From the jury’s motivation:
“The message of the drawing is to apply and share this knowledge, in order to heighten architectural awareness and the importance of nature when building and drawing for the masses. The drawing draws our attention because of its pure composition, its mastering of light and shadow, and its way of addressing the theme in a poetic and authentic way, seen from a Maori point of view.” 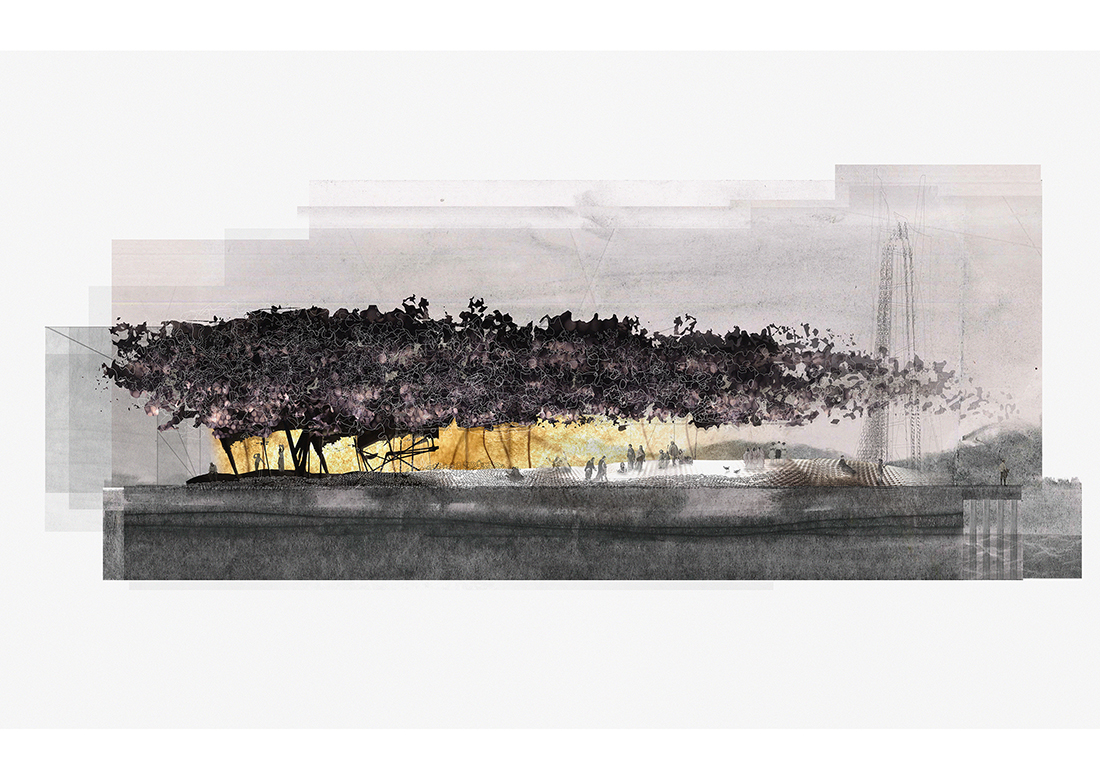 The third prize was taken by Youngi Kim (New Zealand) from The University of Auckland (New Zealand) for the drawing "The Void Between Light and Shadow".

Concerns about the future

The competition was held for the seventh time this year. The purpose is to explore new trends in architecture through digital drawings and challenge the use of new techniques and mixed media. The jury was very impressed by the complexity and high level of the submitted drawings – drawings that precisely make use of many different techniques and methods.

“You are not only impressed by how skilled the contributors are graphically but also by how insistent and full of attitude their entries are when it comes to expressing their concern for the world’s future. And also how committed they are to contributing to the way we understand the physical and mental world – in both the short and the long term,” said Rector Torben Nielsen.

The jury’s international member, Professor Eva Prats, makes a somewhat similar statement:
“I am impressed by several of the participants’ thoughts, dealing with destructive forces, decadent realities but always presented graphically in a very constructive way, making prevail the affirmative attitude of architecture.”

The drawings got Thomas Bossel, architect and third member of the jury, thinking:
“They evoke powerful emotions: make you sad, puzzled, but they also make you smile. What probably affected me the most were the concerns about the world of tomorrow. Concerns that are reflected in many of the drawings. I hope the future will look less bleak.”

Drawing of the Year 2019 is supported by schmidt / hammer / lassen architects and VOLA.

More about Drawing Of The Year 2019