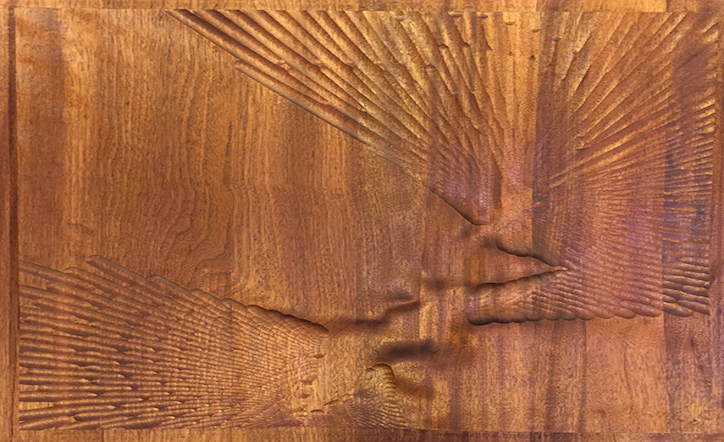 Drop by the canteen and experience an exhibition by Studio 2B that visualises the quantitative data and qualitative characteristics that have shaped Anholt Island. The exhibition is a result of a

Drop by the canteen and experience an exhibition by Studio 2B that visualises the quantitative data and qualitative characteristics that have shaped Anholt Island.

The exhibition is a result of a three-week workshop during which students explored a design pipeline process while taking control of manufacturing methods and techniques.

Everybody is welcome, entrance is free.

The presented mahogany models and drawings are the architectural version of a Rosetta Stone. They are constructs that record layers of information through virtual and physical techniques, where each step and mechanical process imparts and inscribes knowledge beyond the 1:1.

The models and drawings are visual keys that are used to inspire and influence all decision-making processes in a design project.

The architectural Rosetta Stones record and amplify quantitative information about a site on Anholt Island through qualitative means. They are tools for uncovering realities previously unseen or unimagined and will be used for decision making about the location of a building programme, the aesthetic of the building, and even the construction of a 1:1 habitat.

The Anholt Rosetta Stones play an important role in Studio 2B’s contribution to the Aarhus 2017 project Architecture Moves. The Anholt Rosetta Stones are the first step in developing an urban pavilion expressing Teaching Programme 2’s engagement with the rural, combining various aspects and scales to uncover new as well as forgotten qualities in the Central Jutland Region.

What is a Rosetta Stone?

Discovered in 1799 (with its construction dating back to 196 BC), the Rosetta Stone records a decree issued on behalf of King Ptolemy V in Memphis, Egypt. The decree was transcribed in three languages: Egyptian Hieroglyphs, Demotic Script, and (Ancient) Greek.

While the message of the decree, establishing the divine cult of the new ruler, carries historical value (the 1:1), what is more powerful is the way the layering of text has led to a complete understanding of Egyptian Hieroglyphs.

The ability to examine the syntax (character and position) of the Greek text in relationship to that of the Egyptian Hieroglyphs provided scholars with a system of reference and referral that unlocked the hidden secrets of an extinct language.

Through a process of visual layering of information, information that was translated and evolved based on language, the Rosetta Stone has operated as a key to specificity in context; a tool that is continually referenced when questions arise about meaning and direction.