Architectural aesthetics as a catalyst of agency - Aarhus School of Architecture

ARCHITECTURAL AESTHETICS AS A CATALYST OF agency

This PhD project explores architectural aesthetics as a catalyst of agency by linking the concepts of affordances, atmosphere and the Anthropocene in a research through design process.

The project follows a concept-driven research through design methodology. The design process is driven by exploring a link between the concepts of affordances, atmosphere and the Anthropocene. This link is explored both through form and materials and in theoretical analysis. In this way, the project engages with the useful aspect of theory (Jane Rendell).

The research through design process culminates with the installation ‘Urban Carpet’. Urban Carpet was designed in collaboration with Elias Melvin Christiansen and installed on the traffic island in front of Aarhus Banegårdspladsen as part of Aarhus Festuge 2018.

Urban Carpet is a thin membrane made of small pieces of Douglas fir that are woven together using steel wire and charred on the surface to give a subtle, textured aesthetic expression. The carpet is less than 2mm high and follows the surface of the traffic island. It gives off a faint smell and produces a muffled sound when walked upon. 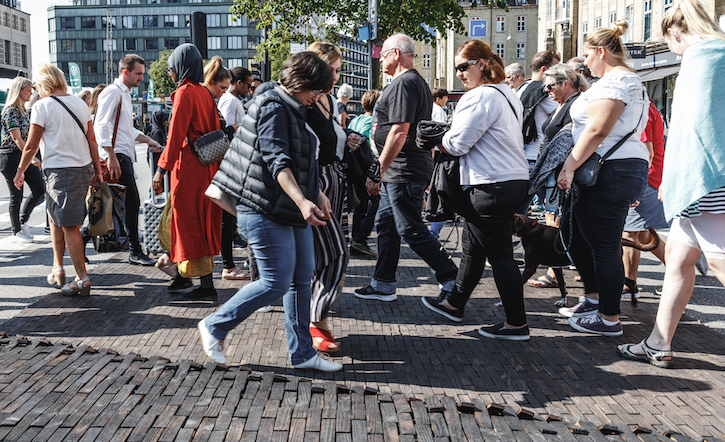 This illustrates that multisensory interactions (aesthetics) with the installation drew people’s attention to the surroundings, stimulated explorative behavior and the perception of new possibilities for action (agency).

Overall the research through design process contributes with both new designerly knowledge about a perception-theory driven design process and new knowledge on the theoretical link between the concepts of affordances, atmosphere and the Anthropocene.

This research project contributes to an onto-ethics approach in architecture and to an interdisciplinary critical spatial practice.

The Labourification of Work
Scroll to top
X
X
...